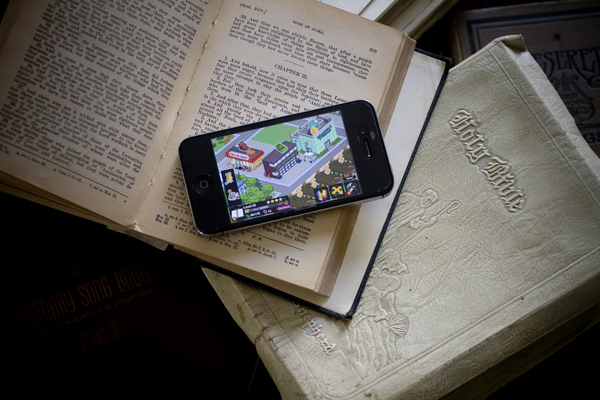 This is a guest post from Andy Blanks, co founder of youthministry360, a ministry committed to equipping youth workers through resources, training, community, and networking. You can read more great content from him at his blog here. Thanks Andy!

This past weekend, I had the chance to lead a workshop at a youth ministry conference. The workshop looked at the effects technology has on our teenagers’ spiritual growth. We looked at both the negative effects (the obstacles) and the positive effects (the opportunity). It was a really good discussion, made all the more humorous to me, in an incredibly ironic sense, by the timely failure of some of the very technology I was trying to use to lead the workshop! Good times ...

We looked at several challenges technology presents to teenagers’ growth as Christ-followers, chief among them was the idea of distraction.

Not only is this impacting our teenagers, it’s impacting us as youth workers. I know for me, it’s been a very prevalent issue in my own personal spiritual growth, and I would venture to guess in yours, too. Our constant connection to technology provides a landscape fertile for distraction. Why is this such a big deal?

I had a friend of mine who used to call discipleship “the stuff of crock pots, not microwaves.” We grow in our faith when we get to know God more and better, becoming more like Him in the process. This process of growing in God comes through varying intervals of spiritual focus, time spent reading Scripture, or meditating on God, or prayer and so on.

Our “technology at our fingertips” world works against these periods of spiritual focus.

A recent article on NBC.com looks at the results of two studies that specifically looked at the impact interruptions had on focus.

One study found that people who are interrupted by technology score 20 percent lower on a standard cognition test.
The second found that many students can't concentrate on homework for more than two minutes without distracting themselves by using social media or writing an email.
A separate study done by researchers at the University of California, Irvine, shows that typical office workers only get 11 continuous minutes to work on a task before interruption.
One of the researchers in the article summarized his findings like this: “The key to transferring new information from the brain's short-term to long-term memory is a process called ‘encoding.’ Without deep concentration, encoding is unlikely to occur.”

When we spiritualize this and apply it to knowledge of God, the application becomes clear: Without deep, uninterrupted learning, knowing God is more difficult. One of the researchers said the following, in what I think is the article’s money quote:

“The digital divide is not about the gadget haves and have nots, but rather about those who can resist the constant distracting tug of technology and those who cannot.”

It think it’s important to ask ourselves, as those who play a role in leading teenagers in their own faith, how we’re doing in growing in ours.

Ask yourself, on a scale of 1 to 10, with 1 being “majorly affected by distraction” and 10 being “I kick distraction’s butt,” where do you rank?

And more importantly, what are you willing to do about it?

4 Ways US Airways Reverse Mentored Me

I knew my life was supposed to be about so much more...